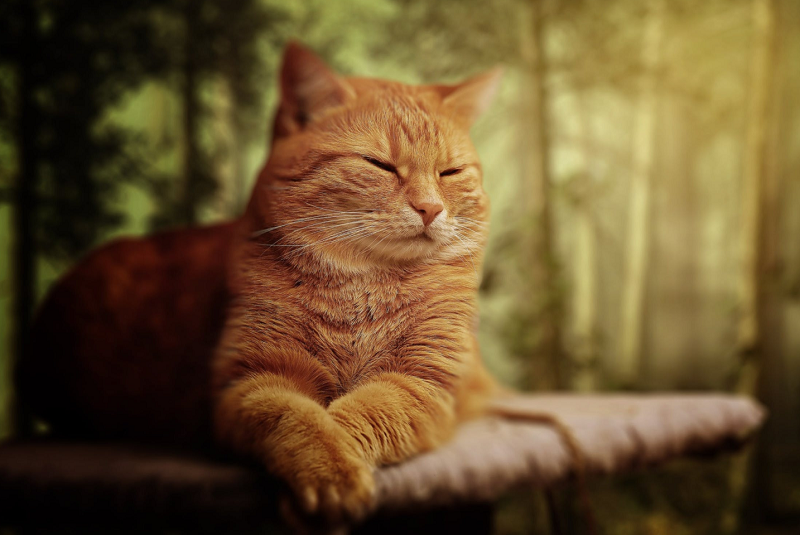 In recent days, your cat’s behavior has changed dramatically. He holds himself back to have a bowel movement and each passage in his litter box is accompanied by painful meows. What could possibly happen to him? Why does he have problems defecating? And since when did it start?
To solve this mystery, there are not 56 solutions. You will need to carefully examine his litter box. If you find traces of urine but no stools present, you are suspicious … Your cat may be suffering from constipation. Sometimes there may be feces, but only in the form of hard stools. Again, this could be a sign of a constipated cat.
To prevent this from degenerating into an intestinal obstruction, learn to identify the first symptoms of constipation and master all the strategies to combat this inconvenience that is very annoying for our friends the felines, as for humans by the way.
Can cats be constipated?
Many animals can experience constipation at some point in their lives. Cats are no exception to the rule.
Whether it’s because of a lack of physical activity or because they have consumed the wrong foods, it is not uncommon for tomcats to find themselves with a swollen stomach from the accumulation of stools. Don’t think this is unique to domestic cats. Even in their natural state, some foods constipate felines.
Yes, your house cat can be constipated and this should never be taken lightly. However, most of the time, constipation in cats is very often mild, although sometimes you may notice traces of blood in their stool. However, learn how to spot the first symptoms of constipation to stop it as quickly as possible, and to prevent it from getting worse.
Why is my cat constipated?
Before even thinking of treating the pathology, do you still need to know the causes? And there can be many
1) He swallowed a lot of his hairs
By dint of licking each other in all directions, your cat ended up with a gigantic hairball in his stomach.
Result: food has difficulty in being properly digested. His stomach is hardening and swelling, his stools are rock solid, and his listless air tells you that he is constipated. Catnip and regular brushing help limit the appearance of hairballs.
2) He is not doing enough physical activity
Did you think the virtues of exercise wheels for cats were just bad selling points? Your cat has just shown you the opposite …
In nature, your cat is forced to exert itself physically. When the meal is not given in his bowl at set times, he has to move his hindquarters. Although physically taxing, this lifestyle is very effective against constipation.
Living comfortably in an apartment of only a few square meters, with no possibility of exercise, your cat has ended up becoming sedentary, even lazy. Indeed, a constipated cat is often a cat who does not do enough sport and his intestines, just like him, also become lazy. If in addition, he spends his time eating, obesity threatens him and this will have the consequences, among other things, of constipating him. Likewise, an older cat can end up with the same problems, as their bowels function less well as they age.
3) His diet is not suitable
Even carnivores need fiber for healthy bowel movements. Yes, your tomcat is a frozen lover of meat or fish, but it is important to include fiber in his diet. This can be done through catnip or adding psyllium to his ration.
If the food your cat eats does not contain enough fiber, there is a good chance that it will start to show worrying symptoms. Why do you think most homeowners have a pot of catnip in their apartment? Give your cat the opportunity to gorge on this herb he loves and his intestinal balance will thank you.
4) He is not drinking enough water
Water is vital for the proper functioning of your feline’s body. Not only does it keep her vitality, but drinking frequently will help your cat to have softer stools.
Sometimes the cure for feline constipation comes down to a bowl of freshwater. A cat who is constipated maybe for lack fluid. If your cat is struggling to hydrate, maybe the lure of a cat fountain would make it easier for her? This is, in fact, a good way for him to get fresh water and at will. Think about it.
5) he is sick
Sometimes constipation is more than just an occasional annoyance. Indeed, it may be a sign of a deeper evil that deserves your attention. Osteoarthritis, an old fracture of the pelvis, chronic kidney disease are all possible causes of your cat’s constipation.
How do you recognize the symptoms of a constipated cat?
Do not expect your cat to tell you about his discomfort by registered letter! It’s up to you to keep your eyes peeled to see whether or not something is wrong with his behavior when he has a bowel movement. Be an observer!
Modest by nature, felines like to be quiet while they defecate and dislike being observed during this intimate moment. However, keep an eye on it from a distance and let’s see the symptoms below that might set you off.

1) a swollen belly
To recognize a constipated cat, observe its stomach. If his stomach is larger than normal and is hard as a balloon, there is a good chance that he is indeed suffering from constipation.
2) Stools outside of the litter box
Likewise, a cat that appears to be restless near its litter box requires special attention. Indeed, if she has to struggle and suffer every time she needs to defecate, your cat has come to associate her litter box with pain. Therefore, a constipated cat will tend to have a bowel movement other than in the toilet.
3) Hard stools or traces of blood
Start by observing his feces. It’s not fun, but someone has to do it right. If he has hard stools or has bloody (black or red), we recommend, without being alarmed, to call your veterinarian for advice and, if necessary, to make an appointment with him.
4) Other symptoms
Rarer, although very alarming, a constipated cat can vomit after ingesting food. Other symptoms can point to the tip of their nose: fever, loss of interest in all your foods, difficulty moving, …
If you notice that your feline is spending his time in his litter box doing nothing, it may not be a constipation problem but a urinary problem (cystitis or urethral obstruction).
What if my cat is constipated? Treatment and solutions
There is no longer any doubt: your cat is constipated. Don’t let him struggle every time he goes to the litter box. There are many remedies and laxatives for constipation. Likewise, there is no lack of natural treatments to combat this discomfort.
Remedies prescribed by veterinarians for constipation
After the consultation, the veterinarian may prescribe a laxative to make his stools soft, as well as a food rebalancing. But be aware that if constipation has been going on for a long time, a laxative will not suffice. Your cat may need to receive an enema and an infusion to be rehydrated.
This is why, to effectively fight constipation, it is recommended to intervene quickly at the risk of ending up with a pet that suffers on a daily basis, and very expensive veterinary treatment.