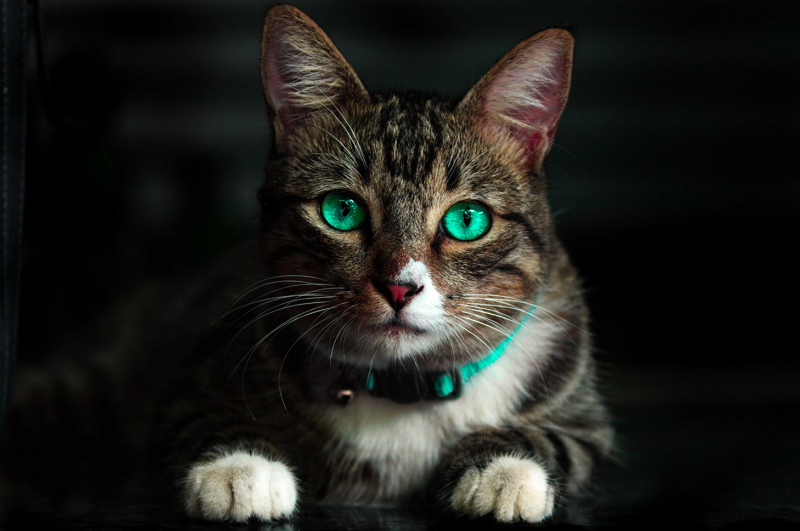 Have you ever wanted to see the world through the big eyes of a cat?. But does the color of their favorite toy matter to them? Here’s everything you ever wanted to know about how a cat really sees.
Do cats only see black and white?
No. Cats undoubtedly see some colors, although their color spectrum, compared to ours, is less vivid and more pastel. Artist Nickolay Lamm has taken photos that juxtapose a cat’s view of the world with our own. The photos you can see really bring out intense greens in “human vision” while they have darker sepia undertones in “feline vision”.
Why can’t cats see like humans?
Humans actually have excellent color vision compared to that of most other mammals. Color perception is linked to specific neurons in the retina of the eye, photosensitive cells called “cones”. Humans have three types of cone cells (and about 12% of women have four), while cats have only two. We also have about 10 times more cones in our eyes than cats. This is what allows us to see the world in a much more colorful way than they do. Those of us who have three types of cone cells can see up to a million colors, and women with 4 might even see up to 10 million.
To the extent that cats are dichromats (the scientific term for animals with two-cone vision), their vision is comparable to certain varieties of dichromatism, and more specifically to the color blindness of humans. This includes the notorious inability to recognize red and green. Some scientists believe that the cat’s vision is limited to the blue/gray/green spectrum, while others believe that it can also distinguish shades of yellow.
How do we know cats see colors?
I asked Pistachio, my friend’s cat if he could see the snake in this Ishihara test, a color test to look for blemishes in green and red hues. He looked at her as if he had seen a cucumber, glanced at me, then continued to conscientiously lick his stomach.
This uncooperative subject of the experiment made me wonder how anyone ever discovered what colors cats see …
There are at least two methods to study the color vision of the cat. One is quite similar to the Ishihara test mentioned above, and particularly astute scientists have used what is almost irresistible to a cat: LED laser pointers. Using single-color LEDs, they studied cat’s reactions to different colors. Conclusions? Cats have a color vision gap of around 505 nanometers (bright green), which makes them excellent examples of classical color blindness deficient in green/red.
Of course, the scientists also studied the cat’s eyes and counted their number of cones (color receptors) and rods (light receptors). Although the number and variety of cones are limited in cats’ eyes, it is a whole different story when it comes to sticks.
Can cats see in the dark?
When it comes to night vision, cats have three huge advantages over us. First, with three to six times more light receptive rods than humans, cats see much better than us in low light conditions. The rods also allow them to detect movement in dark conditions, a valuable skill for hunting at dawn or dusk. My parent’s cat, a Bengal, loves bringing back mice found in the garden to them for breakfast. A real little hunter!
The second reason cats have such good vision in the dark is due to the shape of their pupils. When contracted, the cat’s eyes appear reduced to two narrow slits. But when dilated, their elliptical pupils can enlarge to take up almost the entire space of the eyeball, which is a great way to let in as much light as possible. The third extraordinary feature explaining their night vision is their phosphorescent eyes which shine almost supernaturally at night.
The cat’s eyes have a reflective layer behind the retina called tapetum lucidum, the “carpet of light”. The tapetum reflects the light that passes between the rods and cones, literally giving them a second chance to catch the light they would have otherwise missed. When the light bounces off the tapetum, we see the cat’s eyes glow in this almost supernatural way. Most cats have a green glow, but Siamese can have a yellow one, and some white cats with blue eyes can even be blood red!
Why do cats have better peripheral vision than us?
Cats’ eyes are categorized a bit more on the sides of their heads, while ours are looking straight ahead. This gives cats an advantage in terms of peripheral vision, which can be up to 200 degrees, while humans have 180-degree vision.
However, there is always a balance between peripheral vision and depth perception. The fact that human’s eyes are closer together gives them better depth perception than cats. But our feline friends are not to be pitied: cats have better depth perception than all other carnivorous species, which makes them formidable predators.
How precise is the cat’s vision?
Compared to that of humans, not great. If a person can see an object 30 meters away with perfect vision, a cat must be located about 7 meters away to see it clearly.